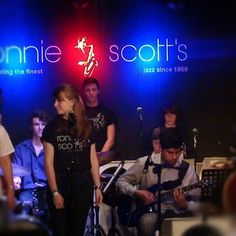 Rhiannon @ Ronnie Scott's - 2013
Rhiannon has had no formal training as a vocalist, save lessons through records from the greats. In July 2013, whilst playing trombone as part of Ronnie Scott's "Big Band In A Day" scheme, she had the chance to sing to a sold-out house at the infamous club, and hasn't looked back since!
​
​Although brass always came first, Rhiannon sang with the Forest Little BIG Band throughout the band's time in formation, and, when there was no jazz to sing, was a member of her schools' Chamber Choir. Most of Rhiannon's vocal history has been made up of helping choirs on harmony parts during bars rest, although she is rather proud of the top A that was recorded when she sang Carmina Burana for her schools' 400th Anniversary concert.


​
Since moving to Manchester, Rhiannon has had the chance to sing one of her original songs, Du Liebst Mich, with the Manchester University Big Band. She is so grateful to the band for making one of her childhood dreams come true, and to her partner Mark Harrison for orchestrating the parts, and making her do it in the first place!